Did Jesus Ever Claim to be God? 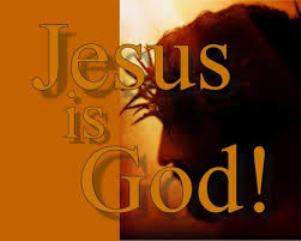 The question of Jesus’ deity was formally settled by the early church at the Council of Nicea in A.D. 325.  Yet I still find this vital doctrine challenged by many people today.  Often times this rejection of truth comes from critics of Christianity who seek to disprove all teachings of Scripture.  Perhaps the best way to address this question is to ask “Did Jesus ever claim to be God?”  Proper hermeneutics and a plain reading of the Bible confirms that He did.

While on earth Jesus made several references to His equality with God.  For example, in John 10:30 He clearly stated, “I and the Father are one.”  Another example is found in John 8:58 when Jesus said, “I tell you the truth…before Abraham was, I AM.”  We can understand the meaning of what Jesus was saying in the response to His statements by the Jews.  In both instances they wanted to kill Him!  John 10:33 tells us the reason for their indignation: “For a good work we do not stone You, but for blasphemy, and because You, being a Man, make Yourself God.”  These unbelieving Jews were attempting to uphold the Mosaic Law that required death to anyone who would blaspheme the name of the Lord in such a way (Lev. 24:16).  And if Jesus were not God they would have been correct in their assessment.

There are many other verifications of Jesus’ equality with God throughout Scripture.  The apostle John emphasizes the concept of Jesus’ deity in John chapter 1: “The Word [Jesus] was God” and “the Word became flesh” (John 1:1, 14).  These verses clearly indicate that Jesus is God in the flesh.   Another verification of Christ’s deity is found in Acts 20:28; “Be shepherds of the church of God, which he bought with his own blood.”  It was Jesus who shed His blood for the church and yet this verse declares that God purchased His church with His blood.  The only conclusion you can arrive at with this evidence is that Jesus is God!

Concerning Jesus, Thomas the disciple declared, “My Lord and my God” (John 20:28) and yet Jesus did not correct him.  If Jesus is not God then Thomas would have been guilty of the worst form of idolatry and blasphemy.  In Hebrews 1:8, the Father declares of Jesus, “But about the Son he says, ‘Your throne, O God, will last forever and ever, and righteousness will be the scepter of your kingdom.’” The Father refers to Jesus as “O God,” indicating that Jesus is indeed God.  Further evidence is seen in Titus 2:13 which encourages us to wait for the coming of our “great God and Savior, Jesus Christ” (see also 2 Peter 1:1).

Jesus Himself never rebuked people for worshiping Him.  If Jesus were not God, He would have told people to not worship Him, just as the angel in Revelation 19 told John not to worship him (the angel).  The angel goes on to instruct the apostle John to only worship God (Revelation 19:10).  Several times in Scripture Jesus receives worship (Matthew 2:11; 14:33; 28:9, 17; Luke 24:52; John 9:38) and again, He never prevents or prohibits such worship.  There are many other passages of Scripture that stress the deity of Jesus Christ.

Vital to the Christian faith is the fact that Jesus is God.  If He is not God, His death would not have been sufficient to pay the penalty for the sins of the world (1 John 2:2).  If He were just a created being, He could not pay the infinite penalty required for sin against an infinite God.  Only God could pay such a price.  Only God could take on the sins of the world (2 Corinthians 5:21), die, and be resurrected, proving His victory over sin and death.

These are truths we need to stand firm in as the attack against the person of Christ continues to increase with time.  Understanding all we can of the deity of Christ is vital to our faith.  It is also part of our sanctification as we “grow in the grace and knowledge of our Lord and Savior Jesus Christ.”